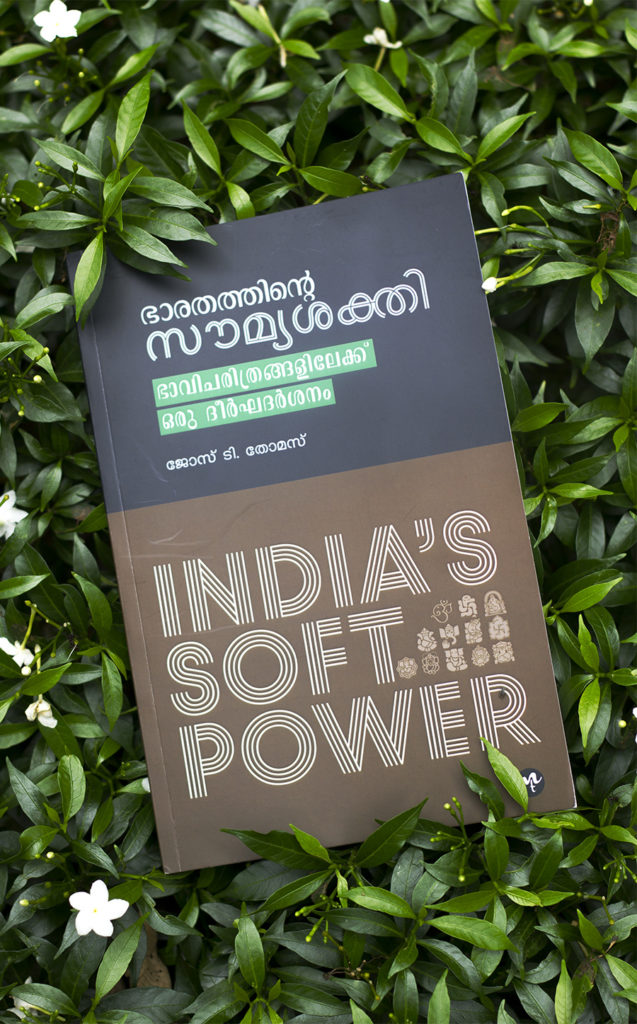 An invitation to read India’s history in her own terms and in pan-Asian dimension. Jose T. Thomas, author of ‘Bhavivicharam’ and ‘Kurishum Yudhavum Samadhanavum’, in 14 chapters forecasts the histories the new generation of historiographers can re-invent. Going beyond the Euro-American methodologies and dialectics, the great saga of cultural evolution starting from the symbiosis of world civilizations in Greater India during the beginning of Common Era can be traced.

The unity in Indian diversity is presented as the soft power for the new world and Uma-Ganesha is shown as its icon.

“This book, India’s Soft Power (Bharathathinte Soumya Sakthi) authored by Jose T. Thomas, is outstanding and thought provoking in its content. Like the author’s celebrated previous book, Kurisum Yuddhavum Samadhanavum (Cross, War And Peace), this book also contains valid propositions for the attention of historians, who are engaged in writing India’s history. The book is full of logic, embedded in high philosophy.

In the book, the author has rightly observed that we do not have a comprehensive book on Indian history featuring all its facets. This is because those who ventured writing it had adopted a skewed approach followed by European historians in writing histories of their countries, which is thoroughly unsuitable for writing India’s history. Its unsuitability arises primarily from the fact that while Europe has a War tradition, India has an intellectual tradition. Therefore, the yardsticks to be used for recording their histories should necessarily be different.

As historians of countries, which have a war tradition, the primary focus of European historians has been on the divisiveness in them and its ramifications, besides on their rulers, their wars and conflicts and other events revolving around them. Their narratives have been largely confined to the stories of confrontations, victories and defeats, and their causes and consequences. Moreover, the European history writing has displayed a strong male bias, as they narrated largely the stories of the heroism of wars of their male rulers. Therefore, the European approach is obviously unsuitable to capture the richness of India’s past, or to record its history.

Being a Civilization marked by its intellectual tradition, during the last thousands of years India has nurtured the framework of ‘unity in diversity’, glued by equality, harmony and compassion. Gender equality has been a notable feature of Indian Society. As the author has emphasized in the book, India has the longest civilizational history, and has imbibed Advaita, embedded in Indian Upanishads, which proclaims universal equality and oneness of the humanity and its indivisibility. Therefore, a true comprehensive Indian history book would be the story of the evolution of the humanity as a whole. The material for writing it is avaitable in the 6,000 year old records of ancient Indian culture.

The Indian approach has accepted both empirical evidence and intuition–based records, which keep proving themselves by later experiences, as valid sources. Thousands of years old intuitive discoveries of Indian Sages and Rishis, made through their deep meditation and unfailing intuition, backed by their credibility established in due course by later experiences, make them valid sources for writing India’s history. Indeed, in the history of India, intuition of Sages and Rishis enjoys a valid position, besides other empirical evidences accrued from time to time. They include the origin of human life, cited in the Advaita philosophy, embedded in thousands of years old Indian Upanishads, which no Western scientist could resolve till today through their presumed ‘empirical’ research. Albert Einstein once confessed that he could not resolve the question of how the first vibration of life occurred in the human body. This facet of India’s history must also be taken into account while writing India’s history.

India’s history is a story of people’s movement towards attaining universal unity of humans, invoking knowledge, equality, compassion and cooperation. It is people’s history, the history of men and women joining together as equal participants. In the book the author has discerned, with uncommon acumen, India’s pivotal role in the ongoing overarching evolution of the humanity into a large ‘Commune’, obliterating all dividing lines. He has noted also the blooming of a new humanism, worldwide, through the cyber civil society, leading the humanity towards equality, equity, peace and social justice.

In this emerging new world of equality, you discern the merger of all Civilizations into one, like the Supreme Soul in Advaita. In this profound transformation, compassion and human solidarity have become the super glue of the unity of the humanity. The author has underlined the fact that a compassionate and cooperative relationship has been, and is, the fulcrum of social relationship of the humanity. India has attained it thousands of years ago through its soft power, and the world is in the process of attaining it in the present epoch. It is true that beneath the ongoing shallow disturbances in the world, there is a strong undercurrent of human compassion and urge for solidarity worldwide which pulls the humanity towards becoming a large Commune.

In this impending spectacular transformation, instead of kings and emperors and other privileged classes, common people – ordinary men and women – would become the makers of history. As the world gets transformed into a large Commune of all peoples, India’s Advaita would be the driving force, positioning India’s soft power as the light house of the evolving ‘One World’. Therefore, as the author has said, keeping in view the time span and the richness of Indian Civilization, in the array of histories of world civilizations, the history of Indian Civilization deserves to be positioned at the apex.

In the book, Jose T. Thomas have presented the ongoing evolutionary process in the world in a larger canvas of the long history of the world developments ranging from the Big Bang to the present knowledge society, and also in the context of India’s 6000 year old civilizational past.

I do agree with the author’s observation that we do not have a comprehensively written Indian history book dealing with all its facets, mainly because our historians have uncritically adopted a thoroughly inadequate yardstick which European historians have provided to them. Therefore, it is imperative that scholars who are writing India’s history must reject the European yardstick first, as the starting point. Generally, the focus of European historians has been on the facet of divisiveness and its accompaniments, like confrontations, wars and conflicts, and their perpetrators – the war lords, kings and emperors. Obviously, this framework is thoroughly unsuitable to comprehend India’s history, which has a spectacular intellectual tradition, encompassing discoveries of Sages and Rishis, made through their deep meditations and unfailing intuitions. This facet of Indian history must also receive adequate attention in books on India’s history.

It is also imperative that contemporary historians should be able to see the enlarging movement towards the unity and wellbeing of mankind and its harmonious relationship with nature and environment. They should see how a new generation, through its new connectedness, is coming up globally, with a new outlook transcending all cultures and continents. This ongoing process also strengthens the spectrum of unity in diversity. This historical evolution also must be recognized.

No doubt, a ‘One World’ is in the making quietly behind the occasional shallow confrontations of national establishments. India’s Advaita philosophy, consciously or unconsciously, guides the vision of the urge for human equality. A historian must be able to see this coming together of the people around the world, bypassing all existing divides. A historian must recognize this fundamental fact when he writes India’s history.

This book will stimulate the movement for the building up of a One World before the setting of the 21st Century.

(To order 2 or more copies or if you have any questions about ordering, kindly contact on WhatsApp or email)